Today I will be ranking players 30-21. These guys are decent starters or great depth players, and are virtual locks to make the 53. The guys who aren’t starters are key rotational contributors come game time. 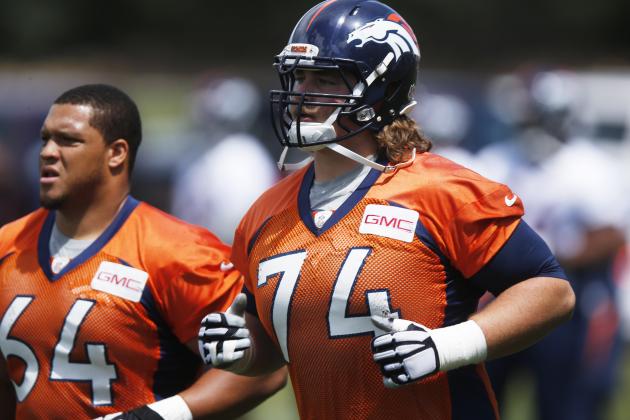 Ty Sambrailo will either flop or flourish in 2015. A 2015 second rounder expected to compete to maybe start at the right tackle spot, he will now be starting at left tackle most likely, post Ryan Clady injury. This presents a positive and a negative for Sambrailo. On the one hand, he is most at home at the left tackle position, and is in a much better position to succeed there. On the other hand, there is a lot of pressure that comes with protecting a Hall of Fame quarterback’s blindside. I believe that Sambrailo will do a solid job, and solidify himself as the starting left tackle of the future. I still wonder if he wouldn’t be a better left guard however, and would rather have Isaiah Battle manning the left tackle spot.

Bruton, a special teams Pro Bowler, fills his niche well. At 27, he is still young enough to develop into a better defensive player as well, but he hasn’t been great in that regard to this point. Still, he is such a great special teamer and leader that he is guaranteed a spot going forward. He is the type of guy who could retire a Bronco, without ever making a ton of money or technically being a starter. Fun fact, he is also a substitute teacher in the offseason. Garland may stand to gain the most out of any player from the Broncos’ switch to the ZBS. A former athletic defensive tackle, Garland has made the switch to left guard. He ran the 40 in 5.07 seconds, before serving his two year service requirement in the Air Force. The Broncos kept him around the organization that whole time, and after a year on the practice squad, he is now ready to play. He eats 10,000 calories a day to keep his weight up at 315, and is a dedicated gym rat. He has recently been getting 1st team reps, and performing well. He should be the starting left guard come week 1, and I am personally rooting for him.

Ray was one of the more underrated players in the 2015 draft, and Elway was wise to scoop him up. We did have to trade Manny Ramirez to move up and take him (which I see as a positive) but the athletic pass rusher was well worth it. While his 4.68 forty didn’t stack up great against a loaded 2015 class, it was still excellent by normal year standards. Plus, Ray’s fall has put a new chip on his shoulder, and he will not quit until he is the DROY. That will be tough, given that he’s not even starting, but no matter what he should be a great relief pass rusher for an aging DeMarcus Ware.

Kayvon Webster has been a victim of depth to this point. He is a fast, strong, and lengthy, and showed that as a rookie. Webster was impressive as a rookie in 2013, but then was essentially replaced by Bradley Roby in 2014. Talent needs to play, no matter how deep your secondary is, so this new coaching staff needs to find ways to get Webster on the field, be it at corner or safety. We all know he’s a playmaker when given opportunities.

For starters, Casey has one of the sadder, more interesting stories in the NFL, after a fire burned down his family home, killing his parents at the age of 16. He was then essentially raised by his small town of Azle, Texas. A high school star in football and baseball, Casey was drafted by the Chicago White Sox, and played for three years before retiring to pursue a football career. As a freshmen, he played seven different positions, including quarterback and running back. As a sophomore, he set NCAA records for receptions, yards, and touchdowns by a tight end in a single season. He was also a triple major in Economics, Sports Management, and Managerial Studies, and graduated with a 3.84 GPA, despite being a student athlete. Casey has enjoyed a solid career in the NFL to this point, and has a history with Gary Kubiak. He is likely going to be the team’s starting fullback, unless Juwan Thompson wins that job. Either way, he should make this roster, since he can also contribute in a tight end role.

Given the fact that I have no way of knowing the validity of the allegations against Smith, I will stick to what I know about him on the field. He has enjoyed a pro bowl career with the Texans, and has been a solid pass rusher throughout. He could really help Denver out in that regard. He is an excellent fit for a 3-4, and would be an excellent rotational lineman. His only real on field incident involved him swinging a helmet at Dolphins’ Lineman Richie Incognito, but in retrospect, can you really blame him for that? I hope that he did not commit the crimes he is being accused of, he could really help our pass rush. Naturally, I don’t want him if he’s guilty no matter how good he is, but the proof isn’t there for me to forget about him just yet.

Connor Barth has been one of the more reliable short to mid range kickers throughout his 6 year career. He is terrible at kick offs, but as long as we don’t ask him to do that, he is solid. The Mile High advantage probably also increases his range a tiny bit. There is nothing wrong with Barth, even though his presence requires us to have another kick off specialist. Hopefully Karl Schmitz can punt and kick off.

Anyone who has even glanced at In Thin Air knows how big fans we all are of quarterback of the future, Brock Osweiler. There isn’t much new to say on him. He is one of my favorite players on the roster going forward. His size is elite, he’s a good athlete, he has one of the strongest arms in the league, and he’s a good leader. Combine that with improving mechanics and a lighting fast release, and he should be fun to watch. Unfortunately, he likely won’t see the field too much in 2015. He’s got some guy named Peyton Manning ahead of him. He will show his potential in preseason and garbage time however, and hopefully secure an extension. I would hate to see us develop an elite quarterback of the future, only to see him play out his pro bowl seasons in another team’s colors.

Oh Cody, we barely knew ye in 2014. You want a receiver with size? Latimer’s got that. You want a receiver with speed? Latimer’s got that. You want a receiver with route running ability and consistency to play for a HOF QB as a rookie? Well, that’s a bit of a work in progress for Latimer. Sure, he hardly saw the field in 2014, but learning Manning’s system is difficult, especially as a rookie. I liked the honesty he showed, to admit that it was hard after the season. Now, he will enter 2015 as the unquestioned third receiver, and he should be in for big things. In three receiver looks, we will have classic “bigs” in DT and Latimer playing outside, with Emmanuel Sanders sliding into the slot. That will be hard to defend.

Thanks for reading. I’ll count down players 20-11 Tuesday at some point most likely.