In 2013, the Denver Broncos fielded one of the most high-powered offenses seen in recent history. Led by the cybernetically repaired Peyton “MF” Manning, the Broncos rode a massive onslaught of scoring to the Super Bowl. Since that time, despite a successful repeat visit to the Super Bowl, we have seen an on-going erosion of the offense. I wanted to take a look and see if I could quantify the drop, and see if we can pick out a pattern from the numbers.

To look at the decline, I used a data analysis technique called a heat map. Basically, the heat map colors the table based upon where in the quartile ranges a number falls. Since the color is based upon the internal consistency of the data range, you can look for correlations based upon colors even if the number scales are wildly different. For numbers, I used Football Outsiders DVOA measurements as one of the more reasonable attempts to deconvolute individual contributions.

For example, look at the passing and rushing DVOA for the Denver defense in a heat map. In this table, I took the worst, the best, and the median DVOA for all defenses in 2017, and then created gradients of red to yellow for worst to median, and yellow to green for median to best (my apologies to the protanopia/deuteranopia sufferers out there). Even though the value range for the two measures are different, by using a heat map we can see that both the passing and the rushing defense were average in 2013, improved to a wonderful balance in 2015, then struggled with run defense in 2016 and pass defense in 2017. 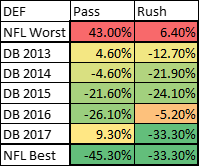 Looking at the overall offense DVOA, things look quite a bit different. In 2013 and 2014, both facets of the offense were nicely green, showing they were above average. Then, in 2015 things fell over a cliff. Passing DVOA went well below average, while the rushing DVOA has been average to poor. 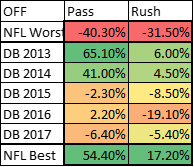 Drilling into the individual positions, we see some more patterns emerge. For the offensive line, we have Adjusted Line Yards as a measure of run effectiveness, and sack rate as a measure of pass protection, while the skill positions have a weighted average of their individual DVOAs. Almost immediately, we can see that the quarterbacks and the line both fell off the cliff together in the passing game. The sack rate goes up, the QB DVOA goes down. Interestingly, the wide receiver DVOA went below average, but did not crater, so while they aren’t stellar, the WRs are not the main problem.

Even more interesting (to me at least) is that the running game cratered along with the passing game, yet the OL performance in run blocking improved. This indicates that the running backs are mostly getting yards from the initial line surge, rather than getting to the second level.

The massive drop in skill position started when Denver lost Ryan Clady. That rushed Sambrailo into the line-up before he was ready, and when he got hurt that put the entire line into disarray. Schoefield, Stephenson, and Watson all took turns playing badly at right tackle, with none of them getting enough time to gel with the rest of the line. Paradis is the only constant performer, with Bolles looking like a potential bright spot for left tackle. Thus far, free agency has not been a band aid for the line.

There’s been a lot of debate about which is the more pressing issue: QB or OL. For the argument that putting a good QB behind a bad OL won’t work, I present our rivals in the AFC West. In 2013 and 2014, Oakland had pretty much the worst OL in the league. David Carr came in 2014, and as the line improved Carr’s numbers got increasingly better.

The opposite has happened to the Chargers. While Rivers is clearly an elite QB, his ability to affect the game has decreased as his line has atrophied over the past few years. The biggest change came in 2014, when injuries decimated their OL and Rivers was pounded into the sod. This year he’s getting pounded again. 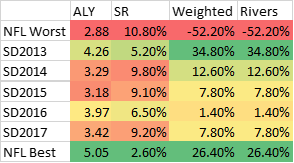 For the argument that a good QB can overcome a poor OL, the Chiefs represent a case study. Despite an OL that has suddenly become average, Alex Smith is playing better than he ever has in his career. Credit Andy Reid with putting Smith into a position to succeed, and credit Smith with taking advantage of it.

Just for fun, to finish up I want to take a look at the heat maps for the individual performers at the skill positions.

No Denver QB has been above average for the past three years. It is also clear that 2014 and 2014 wasted some of the best Manning performances. But for the last three years, the QB play has been abysmal. I’ve defended the QBs when they are blamed for bad OL play, but it is clear that Siemian has regressed and Osweiler never had it. Definitely time to keep trying on the QB Lotto.

Denver should also keep shopping for a running back. In his first year, Anderson had the benefit of a better OL that got him into the second level, but now he seems to struggle and goes down easier. Booker’s numbers are based off limited runs, and Charles is exciting but his ball control hurts.

Tight ends are “meh”. Derby has a negative DVOA despite his acrobatic catches, and as a group they are simply average. Hopefully Heuerman can show that is worth the hype.

Finally, at the risk of offending some, DT is the only starting WR worth keeping. Latimer has had some good situational catches, but only nine of them. Similarly, McKenzie has really been stinking it up, but he has so few catches that his data point is an outlier on the heat map. Sanders and Fowler have been distinctly average as the other starting receivers, and it may be time to move on from them as well.

At the end of the day, the stench arising from the Denver offense is a team effort. There have been too many critical errors in all phases which have prevented victory. Watson whiffs on a block and Siemian is sacked. Watson picks up his block fine, and Siemian misses an open receiver. This team does not have the talent to make mistakes and win. The mistakes need to end, and the coaches need to adjust and start making game plans that will put the offense into better positions.