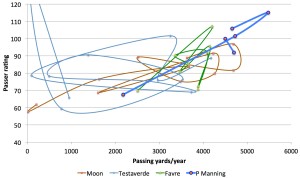 END_OF_DOCUMENT_TOKEN_TO_BE_REPLACED

Brock Osweiler has just made his first seven starts in the NFL, and has had some good games and some lesser ones. I wondered if it was possible to extrapolate how he’s going to do when he develops, so I put together this simple analysis.

I looked at the “passer rating” of a bunch of today’s NFL starting quarterbacks in their first two years or so of starting, game by game, and calculated the average of the ratings for their first games. Then I plotted them by number of games, as shown in the following graph. Most of them improved with some game experience, as one would hope! Brock is the wide, dark blue line, with the orange circles. 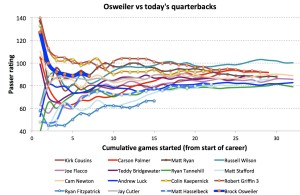 Note: I didn’t correct for the number of attempts per game, so this is just a running average of the ratings. And I left out the games where they either didn’t start, or got knocked out of the game after just a few throws. So the numbers aren’t definitive.

Nonetheless, Brock is near the top. Only Kaepernick and RG3 are higher, and Matt Ryan is about the same. Russell Wilson also passes him eventually, but the rest of them are all lower. OK, Kaepernick and RG3 have fallen from grace, but who knows how that will play out.

What about the quarterbacks that have flamed out? The “Geno Smith, Joey Harrington” highly drafted but never lived up to expectations QBs?

I did the same analysis , and fortunately, Osweiler is well above all of them. (Note I left out the worst of them, the Akili Smith, Jamarcus Russell, Ryan Leafs of the world.) 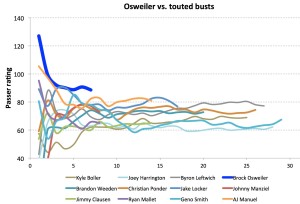 Finally, let’s look at how Osweiler’s first games compare to some of the greatest QBs of all time. 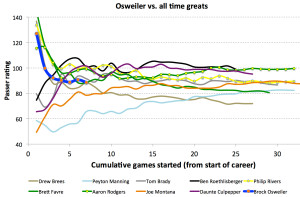 Alright, he’s not right at the top here, but maybe we shouldn’t expect that. He is ahead of Peyton Manning, Joe Montana, Drew Brees. For his first seven starts, he’s basically the same as Tom Brady and Brett Favre. That’s pretty good company!

So based on this pretty simple analysis, I think that Osweiler is a good NFL quarterback, and potentially a very good one.