So, to simplify it, this shows, for each QB who played well into his late thirties, the “Approximate Value” score (from Pro Football Reference) for each one, year by year, starting with age 30 until they retired. 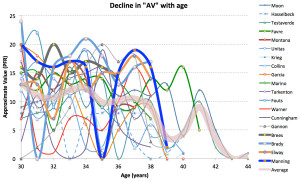 The average of all active QBs is the thick pink-grey line, it slowly declines until about age 38, then drops steeply. At the end, it picks up somewhat, due to the years Moon and Testaverde had at age 41, and Favre’s last season with the Vikings at age 40.

Manning is again shown in dark blue, for visibility. Brady and Brees are slightly larger than the rest, as they are still active. Elway’s is also shown larger, for respect.

Finally, I went back to the first graph, and had another look, particularly at Peyton Manning. He had his record season in 2013, at age 37, and this shows passer rating vs yards for each year, as the dark blue line, with orange circles. The age 37 year has a larger circle, and then I repeated that for Brady, Warner and Elway. For each passer, their line starts at the point with no marker, at age 33, then has a small marker for each other year except age 37, which has the large marker.

Manning has a year missing (the neck injuries), peaks at age 37, then has shown almost a straight-line decline (on this chart). Elway had a slightly higher rating at age 38, but only for about 2800 yards. Warner hit his last peak at age 37, then dropped in both yards and rating. Brady had been trending down since age 34, but increased his passer rating each of the last two years even at age 38. Brees just (this week!) turned 37.

Conclusions? Very few NFL quarterbacks play well after about age 38. Favre, Moon and Testaverde are the only ones to have a good year at 40+.

Peyton Manning is now 39, and this was his worst year. I think it’s unlikely that he’ll be able to regain his previous form. Tom Brady just had the best year ever for a 38 year old QB and apparently thinks he can keep doing it. Drew Brees still probably has a few good years left.

My first (football) love was the Calgary Stampeders. Started following Broncos in mid-70s, as Orange Crush emerged. Bob Swenson and Tom Jackson were my heroes. Moved to NZ in 1985 and now just follow from a distance. View all posts by VonSwenson