I arrived to my spot at the top of the Field 2 berm a little later than usual due to massive traffic on southbound Parker Road due to summer construction work. Thankfully, I did not miss any of yesterday’s action, as I arrived just as the players were midway through stretching. The sun beaming down made it much hotter than it actually was.

There were also a lot of individuals in attendance wearing other teams’ gear, including Chiefs, Steelers, and Vikings garb. I could somewhat understand why some Vikings’ fans were in attendance with the upcoming preseason game, but the others either wanted to troll, to scout a 2018 opponent, or legitimately like any professional football that they can witness in person.

The Broncos showcased various overload and all-out blitz looks. One in particular featured Justin Simmons on the right edge next to Bradley Chubb. On the play, Case Keenum eluded the heavy rush on the play to find Courtland Sutton on a quick out route.

I focused mostly on the backup cornerbacks and Josey Jewell yesterday, as Jewell did not practice at the previous training camp session that I attended. I came away impressed with Isaac Yiadom. He plays with great technique and will be a very good special teams player. . . . Jordan Moore displayed excellent coverage in breaking up a Lynch pass intended for Sutton. I also think that C.J. Smith has a real chance of making the team, especially if Tramaine Brock’s hamstring injury persists. . . . After practice, all of the cornerbacks spent time on a separate field with the JUGS machine catching would-be interceptions.

Jewell was sound. On the plays that he was in, he read his keys well and as advertised, excelled in diagnostics.

In my humble opinion, none of the running backs have separated themselves from the pack. The preseason games will be critical in that regard. I will say that as of now, my favorite runner and receiver out of the backfield is De’Angelo Henderson.

Jeff Heuerman and Troy Fumagalli did not practice. Heuerman caught passes on a separate field from the JUGS machine.

Overall, Case Keenum had another great practice. Both Paxton Lynch and Chad Kelly had up-and-down sessions.

Keenum’s second pass of the day was deflected at the line of scrimmage and intercepted by Chris Harris. Keenum hit Demaryius Thomas with precision on an out route early in practice. Keenum showed good movement to his left to extend a play when no one was open before dumping the ball off to Devontae Booker in the flat. . . . Keenum hit River Cracraft  on a beautiful seam route with Bradley Roby in coverage. Keenum and Cracraft had bad timing or miscommunication on an option route that fell incomplete. . . . On a corner route, Keenum dropped a pass in the bucket over the top of coverage to John Diarse, but Diarse allowed the pass to bounce off his hands. Diarse later atoned for his mistake in one of the Plays of the Day listed below. . . . Keenum continues to show great rapport with Sutton and Emmanuel Sanders. Keenum hit Sanders in stride on a shallow crosser and a deep slant to Sutton.

Lynch’s best throws were on a quick out route to Cracraft, where Cracraft then scooted down the sideline for a solid gain and on a deep flag route to Hamilton. Lynch’s worst throw of the day was on a deep post intended for McKenzie, where Lynch did not look off Dymonte Thomas, who was playing the deep middle. Thomas intercepted the pass with ease.

Kelly connected with Jordan Leslie on three consecutive out routes at one point of practice. Kelly had two consecutive bad throws, where he overthrew a wide-open McKenzie on a crossing route that would have gone for 50+ yards and a possible score, as well as a deep cross to Corey Brown, who was double covered.

The Broncos worked exclusively on the punt return game on Thursday. McKenzie fielded over ten punts cleanly with no muffs. Lindsay let one punt bounce, which touched him and was recovered by the kicking team. Hamilton fielded seven punts cleanly with one muff. Cracraft fielded all six punts cleanly. Tim Patrick caught two punts with no muffs. McKenzie, Lindsay, and Hamilton all stayed well after practice to field additional punts. As of now, McKenzie looks like the best punt returner, but again, McKenzie needs to cleanly field punts in actual regular season games to see if his butterfingers are a thing of the past.

Tom McMahon also had his special teams unit working on keeping the ball out of the end zone on punts. This included work with a kick or dodge ball. McMahon brings a controlled, tempered energy.

PLAYS OF THE DAY 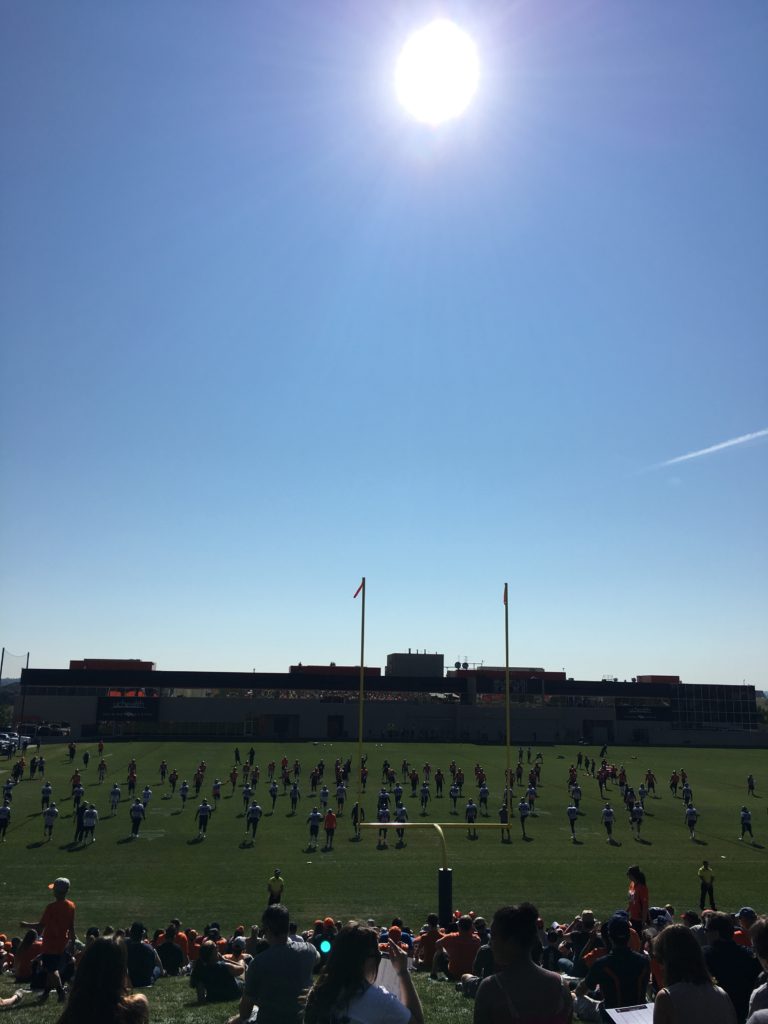 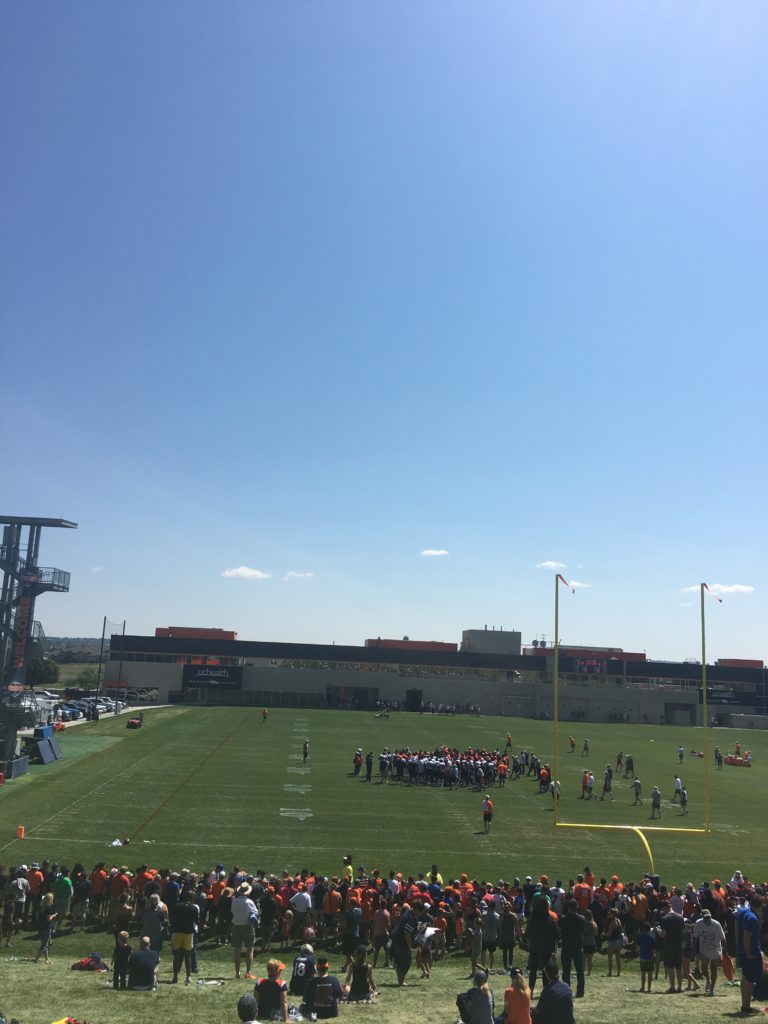