I thought I’d try out what might be a new series for me, taking a closer look at the most recent game and trends using Pro Football Reference’s tools to look at Snap Counts, play by play data, and historical data.  Let me know what you think and if you have any feedback and I might make this a regular occurrence:

Looking at the Broncos Run Plays 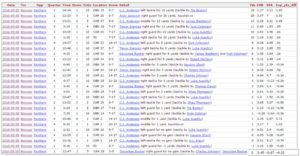 The Broncos had quite a few long runs that accounted for most of their yards.  They broke off runs of 10 yards or more 6 times (22% of runs), and that accounted for 66% of their rushing yards.  I’m very excited about their ability to break off big plays.  On the flip side, they were stopped for 2 yards or less 12 times (44% of runs), and 1 yard or less 9 times (33% of runs).  Two of those plays were successful short yardage conversions (CJ’s 3rd and 1 and 4th and 1 conversions).

Here’s a table with this summarized, along with comparisons to the 2015 Broncos team, the Panthers 2015 Panthers defense and the league average in 2015.  Although not relevant, I added the 2015 Broncos D to show just how dominant they were against the Run.

The Broncos made improvements in not being stuff compared to last year, but I think there is still work to be done if they want to have a rushing attack that can carry the offense.  The Panthers did have a great (but not spectacular) rushing defense last year.  All things considered, I think there should still be much optimism about the rushing attack this year.

Much has been made about the success the Broncos had last year even while turning the ball over 31 times (fourth most in the league).  I think this misrepresents what happened last year to an extent.  Here is a breakdown of the Broncos roster last year based on how many turnovers they had, and how that compares to the league average.

Last year, the Broncos went 7-0 in games with 0 or 1 turnovers, and 3-3 in games with 2.  Both of these trends match what you would expect compared to the league average.  However, the Broncos managed to go 2-1 in games with 3+ turnovers.  This bucks the trend of the league, and is likely due to the Broncos having two of their 3+ turnover games against some of the worst teams in the league (Cleveland and San Diego).  Those games were much much closer than they should have been, but if you are going to have those types of games, might as well be when against crappy opponents.

Before Thursday’s game, this analysis from last year lead me to believe it was unrealistic to expect the Broncos to have much success (even with their defense) in multi-turnover games.  But, the Broncos worked the Mile High Magic again, this time beating the defending NFC Champs despite 3 turnovers.

Regardless of this data point, I still do not believe the Broncos can win if they continue to turn the ball over.  Booker (or whoever backups CJ) will need to hold onto the ball, and Siemian will have to take better care of it as well.  Luck and a good defense can only get you so far. 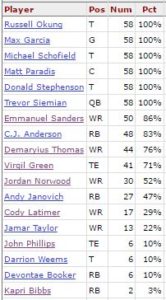 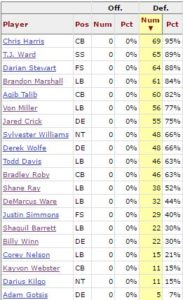 Like I said, let me know what you think of this series.  I did not post links to most the Pro Football Reference data I reference, but I’d encourage you to go explore the site anyways.  I’ve used the site a bunch, and have a pretty good handle on what types of information you can look up.  I’d love to help anyone looking to explore, and answer any questions anyone has about PFR.

Lifelong Broncos fan and current Engineer living and working in Denver. View all posts by Jeremy