With Bob’s musings on the Hall of Fame nominees, this past weekend’s induction of Mr. B to the Ring of Fame and THIS hilariously gone wrong Denver Broncos ‘Ring of Fame Generator’ got me to wonder if #18 is a lock for the team’s Ring of Fame after he retires. 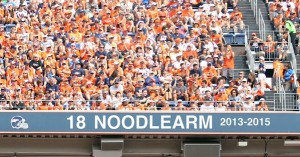 His stats are arguably, one of the best of ANY Denver Broncos athlete over the course of the entire franchise history.

I presume you may be able to decipher my opinion as to whether or not Peyton belongs in the Ring of Fame. More importantly though, while the “he’s as old as father time” and “washed up” and “Brock should be starting” narrative continues throughout the rest of his career here in Denver (regardless of whether or not criticism is warranted), take some time to cherish his play and the time he wears this uniform.

The Denver Broncos were founded in 1959 and over the last 55 years, there have been only TWO quarterbacks worthy of the Hall of Fame and Ring of Fame discussion at the same time. Sit back and enjoy the ride and temper the doom and gloom if he or the Broncos flutter. I only hope I can be at Mile High the day he’s inducted to the Ring of Fame.

Edit:
Jeff Legwold has an interesting article about Peyton’s lasting impact on Denver. Check it out here. Thank You RSH, Esq. for sharing.