Hi there, dear friend reader and Broncos fan. As most of us should know by now, the QB battle in Denver is over. I did a film study on Paxton Lynch’s mistakes in the game against SF for Mile High Brasil, and decided to translate it and share it with you, since I believe the comment with the link will disappear and Google Translate isn’t reliable.

Before I begin, I’d like to say these are all my opinions, and if you disagree with something, feel free to speak up. I’d love to stir some debate. I grew up in a country without much football, and started to really acquire some knowledge at around 2010, 2011, and really started studying the game in 2013, so my observations my lack something for those who grew up with football.

Also, English is not my native language, so if something feels weird, just tell me, I keep improving. 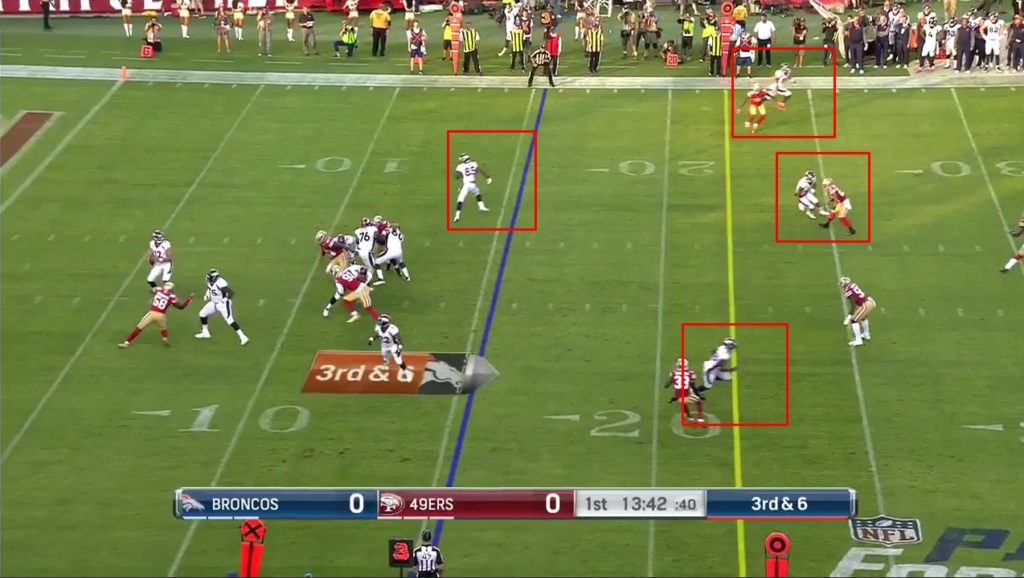 Pay close attention to the four players in the squares. The pocket was clean and we needed six yards. Lynch had two deep options, one at the top and one at the bottom of the screen. He also had an option for a first down in the middle and a player who could get to the first down, since there was nobody around him. Instead of choosing any one of those options, Lynch decided to checkdown to CJ Anderson, that’s over the down marker graphic. CJ got the first down, but he was tackled four yards before the line to gain, and we could’ve had a three and out right there. Take a look on the picture below and you’ll see where CJ got the ball and how three of the four highlighted players were free. Lynch never looked past first read. 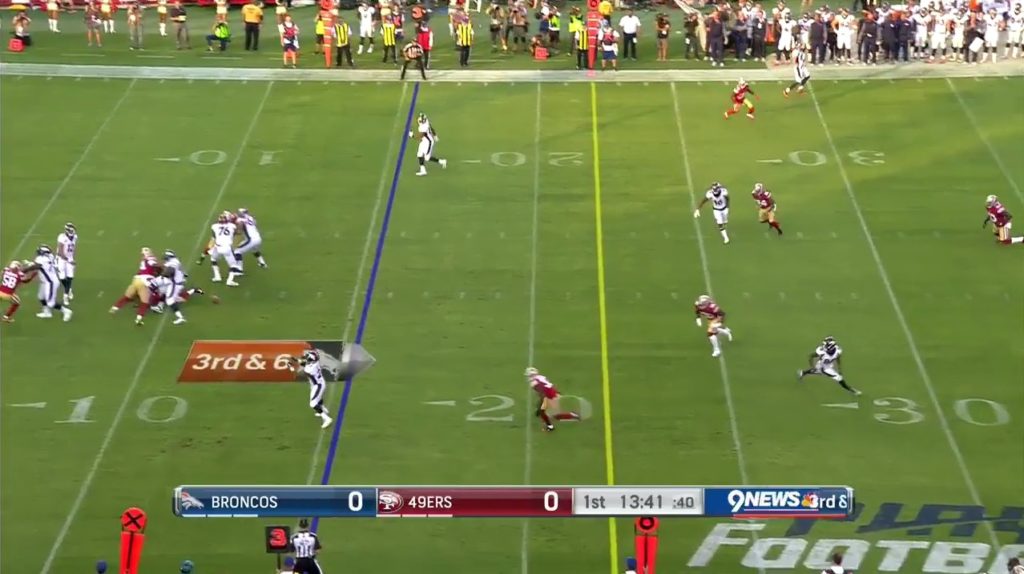 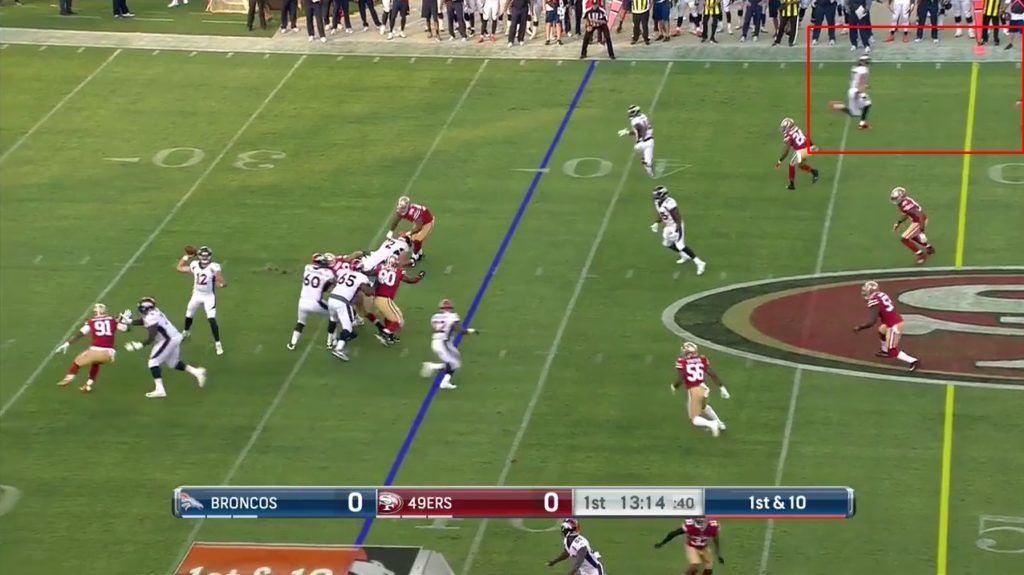 Again, Lynch doesn’t look to the other side of the field. He had plenty of time, and there was a receiver alone at the top of the screen, and if he caught the ball on stride, he could’ve taken it all the way home. The long ball is supposedly Lynch’s greatest asset over Siemian, but he doesn’t go for it. Insted, he passes to DT, that had a defender all over him. The play wasn’t that bad, but it was first down and he had a chance to go home, and chose not to take it.

There are no excuses here. Take a look at the ammount of space DT had on each side of him. He had 10 yards of free space, and Lynch was looking at that side of the field. He would’ve get a ton of yards after reception, as we know DT is capable of. However, Lynch decides to throw it to Virgil Green on double coverage. The pass was horribly overthrown and should’ve been intercepted. He had absolutely no pressure on the play.

This was the first Lynch scramble. It’s true that he got the first down, but we don’t need another RB, we need a capable QB. And a capable QB would see that, at the the top of the screen, there’s a player in good position to get that first down. Even the player at the bottom could get it. But Lynch never saw any one of them, even though he was staring at the right. He didn’t even read, he felt a ghost pressure and tucked the ball. 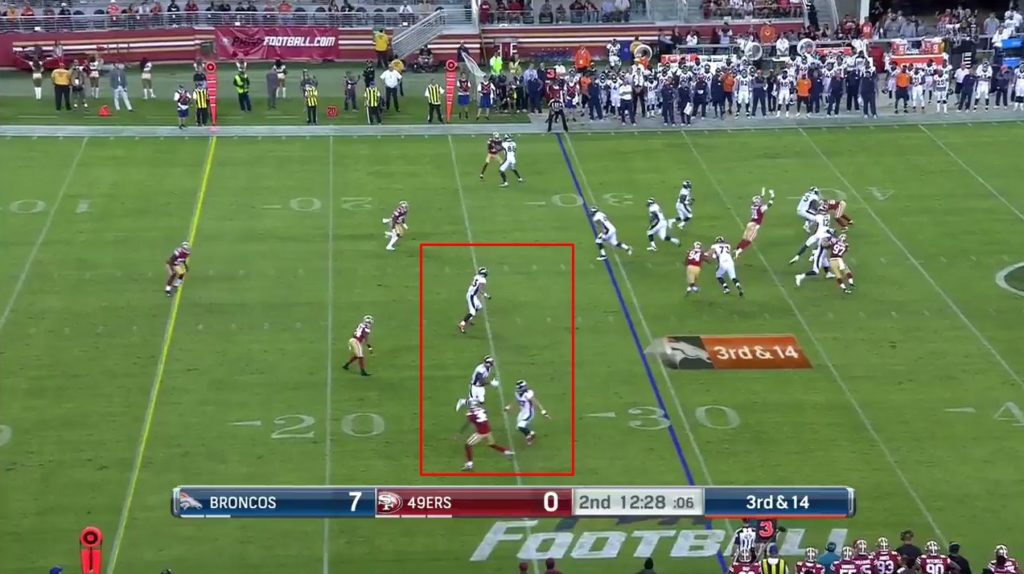 3rd and 14. It is true that the first down was well covered, so it would be hard to get it. However, each yard closer helps the kicker, and we had three players that could get the ball, and one can argue it would even be possible to get a good chunk of yards with the right blocks. However, Lynch never looks to his left. He simply checkdowns to CJ again, we get two yards and McManus has a 45-yarder to boot. Sure, it’s McManus, but I’m positive he’d prefer to kick a 35 than 45. 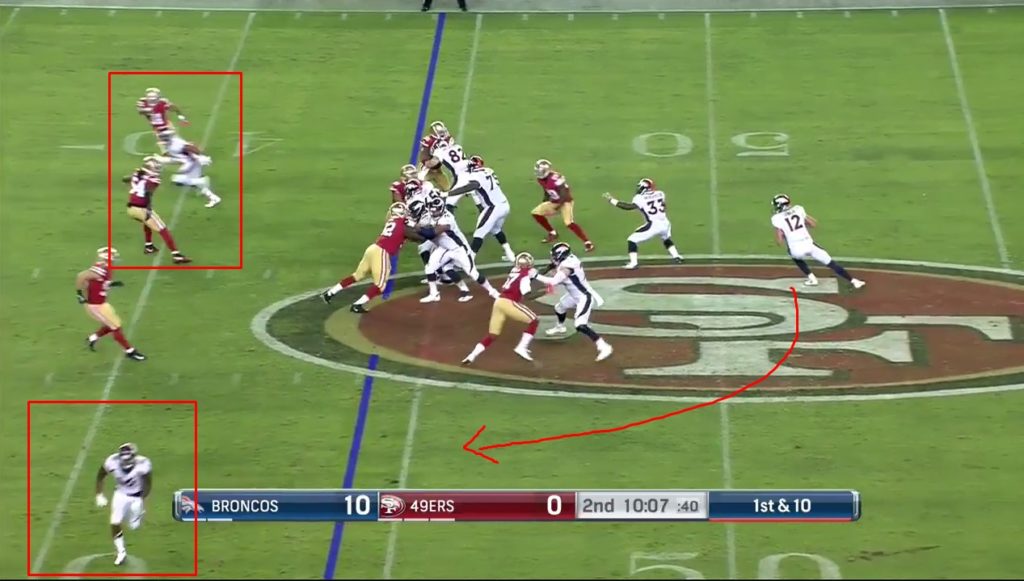 This was another situation in which Lynch ran without needing to. He moved well, set up well had two receivers that were available for good gain… and tucked the ball and ran with it. Henderson stopped to pick up the possible blitz, but the blitzer, after recognizing the play-fake, turned his back to Lynch. He had no pressure whatsoever. He didn’t read what was developing in front of him. 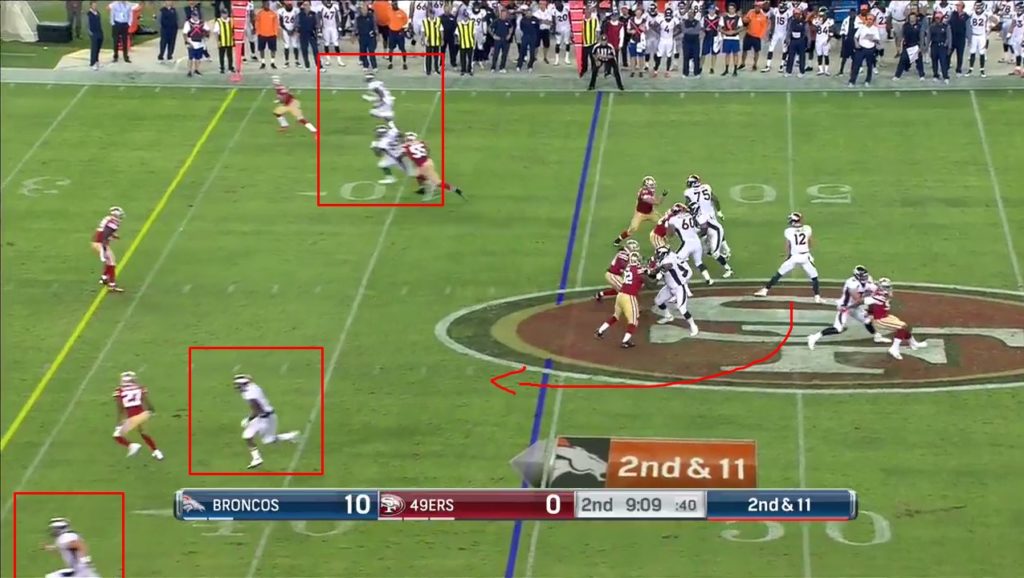 Now Lynch had not two, but four targets. Sunshine is free at the bottom of the screen, and if Lynch has that cannon-arm we read and hear so often, why not show it off here? Pass to Sunshine on stride, he’d be running with the ball until now. Again, a clean pocket, and again, he ran with it. But another important thing for me here is the way he carries the ball. Take a look at the image below:

Lynch holds the ball with one hand with his palm down and it’s the only part of his body touching the ball. If the ball is wet, if he trips up, that ball will get loose easily. If he wants to tuck and run, at least do it appropriately, securing the ball.

One more time Lynch runs without any reason to. The defender who had beaten Bolles was lying down. Lynch only had to climb the pocket, keeping his eyes downfield. He had a free and easy target that would be able to get at least 3 or 4 yards. And this play highlights another bad habit of Lynch. When he runs, he ends the run by diving headfirst, instead of sliding. That can cause a lot of problems, just ask RG3. 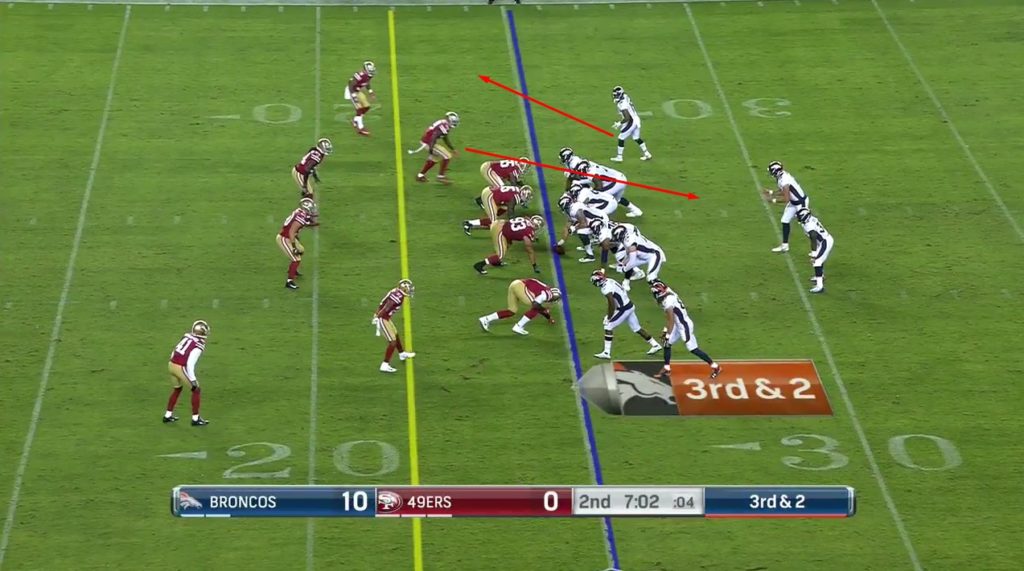 This is the last play I want to highlight, because it was the one where Lynch was sacked. Notice the free Bronco (I think it was Bennie Fowler) at the top of the screen, and also notice the free way the defender had to Lynch. Some people thought that the protection broke down, but there was never supposed to be a protection. This is something Peyton Manning was a master at doing: punish the blitzer. When you leave a blitzer unblocked on purpose, you pass the ball quickly on his back. Take a look at the play 2,5 seconds after the snap (when the ball should’ve been released already): 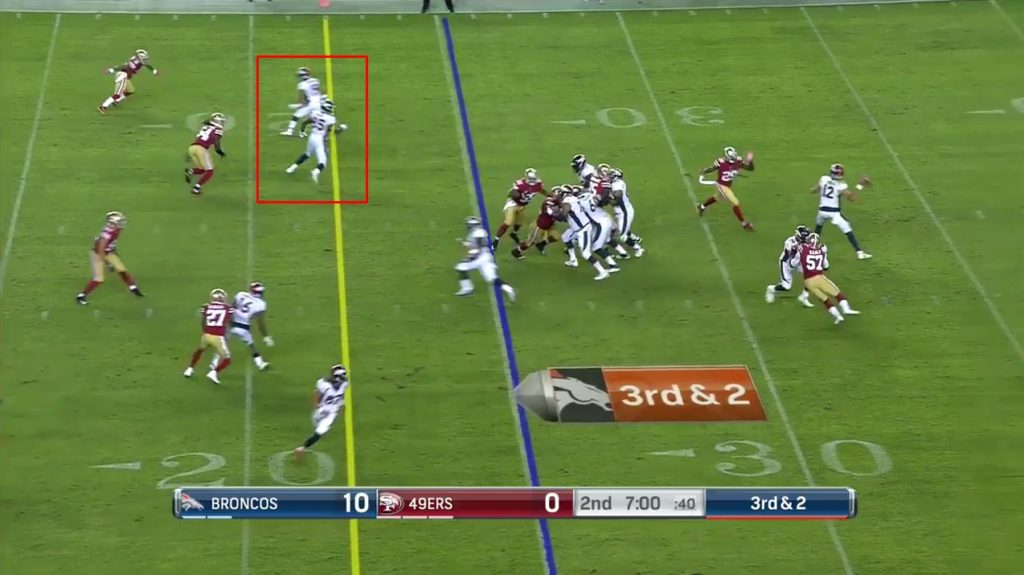 Lynch had two players in great position for a first down. But because he was so slow to release the ball, he was sacked. This kind of play needs a quick release. If you want to be even pickier in this situation, he is athletic. That’s his differential. He should’ve been able to get away from the blitzer (as Siemian did later on the game) and look downfield. He had two other targets at the bottom of the screen, both of them also in a position for a first down. Good athletic QBs aren’t those who tuck and run, but those who can extend plays with their athleticism, without taking the eyes from downfield. Aaron Rodgers does that, Big Ben does that, Russel Wilson does that.

The only conclusion I can get to here is that the game is still too fast for Lynch. He has a hard time reading pro defenses, he tends to tuck and run at the first sign of danger and he doesn’t go through progressions. Even though the offense was simplified for him on the first half, he still couldn’t get it done.

It’s still too early to call Lynch a bust. He was really raw when entered the NFL and I always thought he needed one or two years to settle down, and with a different playbook in his second year, him not being ready yet was somewhat expected. He showed some progress from last year, and has shown some flashes, but the consistency isn’t there, he isn’t ready to start four weeks from now.

The downside for Lynch is that Siemian also hasn’t reached his peak, and with a better OL, a better running game and without the pain on his shoulder, he could be so much better as not to open the door for a competition next year.

These are my views on Lynch. What about you guys?